Welcome to Baku. Baku is the capital and largest city of Azerbaijan, and one of the largest business and financial hubs in the Caucasus region. The city's strategic location between the empires of Europe, Asia, and the Middle East combines cultures and values from all over. The city is home to both old and new and is a perfect example of a city on the rise.

To learn more about traveling to Baku, watch our Baku vacation travel guide video. This is an ad for another Tripetta service approved by Tripetta.

These stats were collected through general studies by prominent institutions that analyzed Baku's tourism sector. They represent Baku as a whole, not certain parts of the city that are either better or worse-off. These studies were then summarized into a given rating.

The Heydar Aliyev Complex is a modern art and museum center. 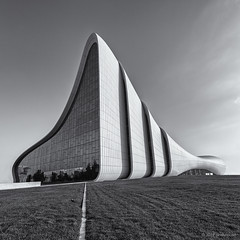 Maiden Tower is a historic 12th century tower in Baku. 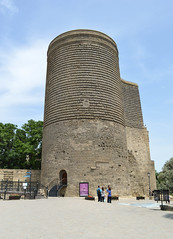 Palace of the Shirvanshahs

Palace of the Shirvanshahs is a 15th century palace located in Inner Baku. 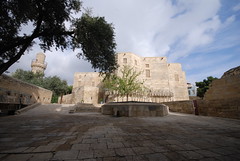 Get a visa for Azerbaijan...

Although founded during ancient times, Baku first gained prominence in the late 12th century when the capital of the region which makes up present-day Azerbaijan was moved to Baku, after the previous capital, Samaxi, was destroyed in an earthquake. The region was later wracked by the Mongols, after they launched their invasion of the Caucasus and Anatolia from their possessions in Russia. The city later became vassal to the Timurid Empire in Persia; present-day Iran. The region of Azerbaijan prospered under the rule of Shirvanshah Khalilullah the First, in the 15th century, who completed construction of a major palace complex originally dreamt up by his father. The Sirvan Dynasty was ousted in the early 16th century by Shah Ismail the First, who converted Azerbaijan to Shia Islam. The region was invaded by Russia in the 19th century, briefly switched hands to the Persians, but formally joined the Russian Empire in 1828. The Russians discovered major oil reserves outside the city and Baku became a boom town. During the First World War and Russian Revolution, many bloody massacres occurred in the city and Azerbaijan was invaded by both Turkey and Iran before Russia restored control of the region in 1920. Azerbaijan joined the Soviet Union. A small oil boom occurred after the Second World War, but money started to flatten out, even after Azerbaijan gained its independence. After new oil reserves were discovered in 2005, Baku is once again a boom town.

"While Uber is the best way to get around when you visit Baku, ALWAYS check your car and driver. There is a tendency for local taxis to greet at the airport or train station and say 'Uber' loudly assuming someone has ordered one." - Megan Starr

Bakuvians are generally friendly people and Baku is a very safe city. Make sure to respect the culture and avoid talking about the conflict in Nagorno-Karabakh.

See if you can travel to Azerbaijan visa-free