Welcome to Boston. Boston is the capital and largest city of the US state of Massachusetts, and one of the most highly educated cities in the world. Boston is home to universities such as Harvard, MIT, BU, and others.

To learn more about traveling to Boston, watch our Boston vacation travel guide video. This is an ad for another Tripetta service approved by Tripetta.

These stats were collected through general studies by prominent institutions that analyzed Boston's tourism sector. They represent Boston as a whole, not certain parts of the city that are either better or worse-off. These studies were then summarized into a given rating.

The Freedom Trail is a route through the center of Boston that includes all the famous historic sites.

Fenway Park is an iconic Boston stadium home to the Red Sox. 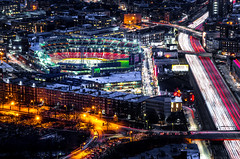 Faneuil Hall is a marketplace and shopping center in Boston. 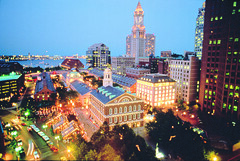 The first European settlement in Boston was made by English Puritans of the Massachusetts Bay Company in 1630. The town was named “Boston” after the city of Boston in Lincolnshire, England, where many of the settlers were originally from. Life in the city remained uneventful until the American Revolution when Boston played a critical role in the victory of the Continental Army. The Boston Tea Party and Boston Massacre both occurred in the city. Paul Revere made his famous ride from Boston to Lexington in 1775. After independence, Boston became a major US port, especially for trade with India and China. During the 19th century, Boston also played a major role in the abolitionist movement and the end of slavery. In the 20th century, Boston’s universities gained great prestige throughout the world, especially Harvard.

"The MBTA is Boston’s public transportation system, and it’s a great way to get around quickly and cheaply. The “T” refers to the subway, which runs throughout Boston, into Cambridge, and into nearby suburbs, providing access to all the attractions located in Boston. Just look for the big "T" in a circle to find a stop. You can also take buses to get all over the city, and the Commuter Rail is an easy way to get to points outside of Boston. You can buy paper “Charlie Tickets” for single or multiple subway rides at vending machines located in most stations. When your ticket runs low, visit a fare vending machine to add value. A single basic fare for the T is $2.75 with a Charlie Ticket, although if you pick up a Charlie Card (a plastic card like a credit card), the fare is lower at $2.25 for one way. You can load the Charlie Card with an amount of your choosing, so it's smart way to explore the city. They're available at almost every T stop, and are free to get. Once on board, hang on! Being one of the oldest public transportation systems in the country, the T is not always the smoothest ride." - GoCity.com

Most of the crime in Boston is centered around inter-gang rivalries. Tourists are almost never targeted.