To learn more about traveling to Brazil, watch our Rio de Janeiro vacation travel guide video. This is an ad for another Tripetta service approved by Tripetta.

These stats were collected through general studies by prominent institutions that analyzed Brazil's tourism sector. They represent Brazil as a whole, not certain parts of the country that are either better or worse-off. These studies were then summarized into a given rating.

The Christ the Redeemer Statue is a statue in Rio De Janeiro that overlooks the city. It is the most popular tourist attraction in Latin America.

Lençóis Maranhenses National Park is a national park in northeastern Brazil that is famous for its rolling sand dunes. 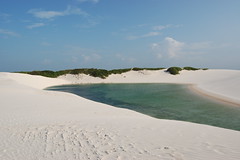 Escadaria Selarón is a set of world-famous steps in Rio de Janeiro, Brazil.

Get a visa for Brazil...

Brazil's history starts with the indigenous peoples. These indigenous peoples all had seperate cultures and spoke different languages. Among the most famous of these groups are the Marajoara who lived in a highly complex society on Marajo Island. Many of these groups have still survived today. There are many theories on who was the first European to arrive in Brazil. The true answer is that we can guess all day, but no one truly knows.

Although, the first European may have been a Spaniard, the Portuguese claimed Brazil after a treaty was signed in Spain with the help of the pope.

After the Portuguese realized the potential Brazil had to become a sugar powerhouse, they started actively importing slaves. Brazil held 10 times more slaves than the (United States) thirteen colonies. This led to many slave rebellions.

Precious metals that were discovered in Brazil, led people from all over the world to come to the country.

In the 1790s, after Haiti went to war with France in hopes of getting independence, the Brazilians were inspired and wanted to revolt against the Portuguese crown to establish a new country where more freedoms would be given to citizens and slavery would be abolished.

In the 1820s, Pedro the First became Brazil's first emperor. After independence, there was much prosperity in Brazil since it became the epicenter of the world's Coffee Trade, producing more than half of the world's coffee. Brazil also produced a lot of rubber.

The Brazilian Empire fell when a Republican coup was led against the Emperor, and Brazil was forced to democratize. It didn't stay this way for long, as a military dictatorship was soon established, under which Brazil's people greatly suffered. During World War Two, Brazil was greatly affiliated with Nazi Germany. And now here we are at present Brazil, a country known for its carnivals, festivities, beaches, and tourism industry.

"The metro is one of the easiest ways to get around major cities like Rio and São Paulo. Fares are around R$3.50 - R$3.80. If you plan to use the metro often, there are rechargable travel cards you can purchase. The metros are generally cleaner and safer than traveling by local bus." - WorldNomads

Make sure to always stay in safe, highly developed neighborhoods and to not travel at night.

See if you can travel to Brazil visa-free