Welcome to Iran. Iran is a country in the Middle East that is known for its architecture, food, ancient civilizations, villages, museums, and bazaars. The country borders Armenia, Azerbaijan, Iraq, Turkey, Turkmenistan, Afghanistan, and Pakistan.

These stats were collected through general studies by prominent institutions that analyzed Iran's tourism sector. They represent Iran as a whole, not certain parts of the country that are either better or worse-off. These studies were then summarized into a given rating.

Tehran is the capital and largest city of Iran. 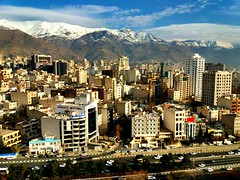 Mashad is a major city in Eastern Iran.

The first civilization to form in Iran was the Achaemenid Empire in the 7th century BCE. During this time, Iran gained control of countries like Turkey, Iraq, Syria, and even Bulgaria. Iran lost a large amount of its territory after a series of wars with Greece in the 5th century BCE. The entirety of Iran was conquered into Greece by the 4th century BCE. Greek rule in Iran ended after the formation of the Parthian Empire in the north of the country. The Parthian Empire expanded north and conquered large parts of Eastern Turkey and the Caucasus. In the 3rd century, the Sassanian Empire succeeded the Parthian Empire and Iran became one of the world’s largest and most powerful countries. The Sassanian Empire fought a series of wars with the Roman Empire to gain control of Anatolia and the Caucasus, and large trade routes were formed with India and China during this time. Iran converted to Islam in the 7th century and the country joined the Umayyad Caliphate. The Abbasids overthrew the Umayyads in the 8th century and Iran was ruled by a series of autonomous dynasties until the 10th century. In the 10th century, Ghazvanid rule was established over Iran and the country formed a union with Afghanistan. This lasted until the 13th century, when Iran was conquered by the Mongols. In the 14th century, the Mongol Empire collapsed and Iran converted from Sunni to Shia Islam. The Safavid Empire ruled Iran from the 16th to the 18th centuries. The Qajar Dynasty came to power in 1796, and following several wars with Russia over control of the Caucasus, many Armenians and Azerbaijanis migrated to Iran. During World War Two, Germany organized a coup to overthrow the Iranian Government. In 1953, another coup was staged by the United States. After the Islamic Revolution, the US-backed government was removed and modern Iran was formed. Iran fought a war with Iraq in the 1980s and formed an alliance with Russia.

"To arrive in Iran you can choose air, rail, or bus system depending on where are you coming from. Once you are inside the country the public transportation in big cities are available in a low price for everyone. Taxis are widely available in big and small cities. You can either hail a private or a shuttle taxi." - Irandoostan

See if you can travel to Iran visa-free