Japan is an island country located in the Pacific Ocean. Its charming culture has grasped the world with Japanese music, Japanese food, and Japanese literature now popular nearly everywhere. Moreover, Japanese technology is renowned for being of insurmountable quality.

To learn more about traveling to Japan, watch our Kyoto vacation travel guide video. This is an ad for another Tripetta service approved by Tripetta.

These stats were collected through general studies by prominent institutions that analyzed Japan's tourism sector. They represent Japan as a whole, not certain parts of the country that are either better or worse-off. These studies were then summarized into a given rating.

Mount Fuji, located on the island of Honshu, is the tallest mountain in Japan and an active volcano. 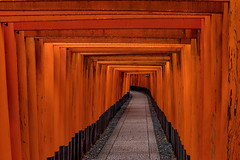 The Tokyo Skytree is the most iconic skyscraper in Tokyo and one of the tallest in the world. 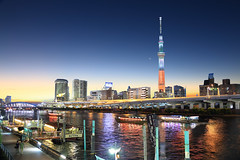 The history of Japan begins with the Jomons, who lived in Japan from 13000 BC to 300 BC. The Jomons were primarily fishermen and hunter gatherers. They grew into the Yayoi Civilization which was more suphosticated and more connected to the outside world. Trade with Korea and China prospered during this time and Japan's first social classes formed.

Japan's first center of power developed in Yomato Province during the Kofun Period, when Japan first unified as one. Shinto was the official religion of the Kofuns. The Asuka Period followed the Kofun Period during which trade with Korea grew once again and Buddhism, Taoism, Confusianism were introduced. The Chinese writing system was also adopted.

This all terribly collapsed during the reign of the Fujiwara Clan that abolished the practices of the Asuka Period and instead bought all land from the people and then distributed it evenly among farmers. A new tax system from China was also introduced.

During the Nara Period, the first permanent Japanese capital was established at Nara. Money to build monasteries and beautiful Chinese-style buildings was invested into the capital but it quickly moved to Nagoaka and later to Kyoto where it remained for one thousand years.

After the move to Kyoto, the rulers of Japan during this time wanted to increase taxes. Much of the country's farmers became impoverished, as a result.

The Fujiwara Family that we mentioned in our "Early Japan" section continued to stay in power and controlled many important government offices until the 11th century when the new emperor wanted to rule the country by himself.

In the 12th century, a rivalry between the country's new noble families, the Taira and the Minamito escalated into a war with a decisive victory for the Minamoto.

During the Kamakura Period, conflicts between the country's elites continued. New sects of Buddhism were also introduced during this time.

During the Muromachi Period, frequent spurs between the country's royal courts, diminished their power and gave rise to powerful military families known as the ji-sumarai. A few of them gained control of whole provinces.

Portuguese traders and Jesuit missionairies arrived in Kyushu and introduced firearms and Christianity.

The Azuchi-Momoyama Periods gave rise to Oda Nabunaga whose goal was to unify Japan. Making use of modern warfare he defeated the many military families that gained control of the country. After defeating the Hojo Family, he finally succeeded. After succeeding, he was killed by one of his generals and power was handed over to T. Hideyoshi.

Hideyoshi then proceeded to gain control of Korea and China. He gained control of South Korea but Chinese forces from the north pushed him back to Japan. Hideyoshi died shortly thereafter.

Converted Christians in Japan, were also tortured and killed during the Azuchi-Momoyama Periods.

During the Edo Period, Tokugawa Leyasu was appointed Shogun by the emperor and established his capital at (Edo) Tokyo. Leyasu promoted foreign trade and established diplomatic relations with the United Kingdom and the Netherlands. After capturing the Osaka Castle, his last enemies were destroyed and peace prevailed during the Edo Period. Domestic trade and agriculture also improved.

Neo-Confusianism was preached and the ban of Western literature was cancelled. The Russians tried to establish trade connections with Japan but were unsuccessful. After political pressure both inside and outside Japan, the Tokugawa Government was forced to step down and Emperor Meiji's rule was restored.

During the Meiji Period, Japan was forced to sign unequal treaties with European powers to stay independent. Human rights and democractic principles were embedded in the Meiji Government.

Japan's education system became modelled after the ones in France and Germany, and the economy was transformed from an agricultural one to an industrial one. The Meiji Government heavily invested in the military and gained territory from China during the Sino-Japanese War and from Russia during the Russo-Japanese War.

The reign of Emperor Meiji was followed by the rule of the weak Emperor Taisho who shifted the power towards Parliament and the political parties.

"The most efficient way to travel around most of Japan is by train. Whether you're being whisked through the countryside aboard the famous Shinkansen bullet train or are winding your way up a wooded mountainside in an electric streetcar, trains in Japan are punctual, comfortable, safe, and clean." - Frommers

The most important travel tip, is to learn a few words in Japanese, as English is not widely spoken here!

See if you can travel to Japan visa-free