Namibia is a country in Southern Africa that borders Angola, Botswana, South Africa, and the Atlantic Ocean. Namibia is both one of the largest countries in Africa and one of the most sparsely populated countries in the world. The country is famous for its diverse wildlife, its cheetah population, and the dry Namib Desert.

To learn more about traveling to Namibia, watch our Namibia vacation travel guide video. This is an ad for another Tripetta service approved by Tripetta.

These stats were collected through general studies by prominent institutions that analyzed Namibia's tourism sector. They represent Namibia as a whole, not certain parts of the country that are either better or worse-off. These studies were then summarized into a given rating.

Etosha National Park is a nature reserve in Northwestern Namibia. 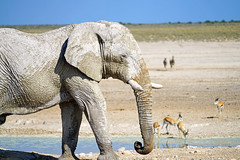 Deadvlei is a red clay desert in Namibia that is famous for its ancient dead trees.

Windhoek is the capital and largest city of Namibia and offers some of the country's top attractions. 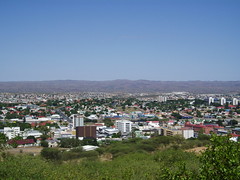 Get a visa for Namibia...

The first humans arrived in Namibia around 30,000 years ago. These groups were primarily hunter-gatherers. For a long time Namibia was divided between two of the country’s main tribes, the Ovambo from modern-day Angola, and the Kavango, from modern-day Zambia. A Portuguese man called Diogo Ciao was the first European to step foot in Namibia, doing so in 1485. Dutch colonizers took control of Southern Namibia in the 18th century from their colony in South Africa. Dutch possessions in the region were later ceded to Britain. Although the area was already claimed by Britain, the first white settlements were made by the London Missionary Society in Southern Namibia in the 19th century. Fearing British influence over the entirety of Southern Africa, Germany purchased land in Namibia and soon expanded to control almost the entirety of the country. The colony of German Southwest Africa was born. Many settlers from Germany moved to Namibia in the early 20th century. This stoked discontent and civil unrest from the country’s natives which led to the Herero and Namaqua Wars when Germans massacred thousands of black Namibians. During the First World War, South Africa occupied Namibia. This occupation lasted until 1989, when Namibia declared its independence. Since then, Namibia has become one of the most developed countries on the African continent and was the sight of Prince Harry’s and Megan Markle’s honeymoon.

"City buses are not available in Namibia, but getting around town is easy with taxis and shared taxis. Those traveling long distances to and from major destinations can take a coach. One company offering coach services throughout all of Southern Africa is Intercape Mainliner." - IExplore

Some areas of Namibia are notorious for violent crime and scams. They normally occur in cities, so national parks and other nature reserves are usually the safest places.

See if you can travel to Namibia visa-free