To learn more about traveling to New York, watch our New York vacation travel guide video. This is an ad for another Tripetta service approved by Tripetta.

Targeted groups: Nationals of the People's Republic of China, some US minority groups

These stats were collected through general studies by prominent institutions that analyzed New York's tourism sector. They represent New York as a whole, not certain parts of the city that are either better or worse-off. These studies were then summarized into a given rating.

Central Park is one of the most famous tourist attractions in NYC and a place where locals and tourists come to relax and play sports. 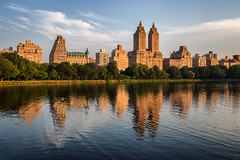 Times Square is the center of entertainment and shopping in New York, and is located near multiple Broadway theatres. The square is home to the New York Times Building, Hershey's and M&M's stores. 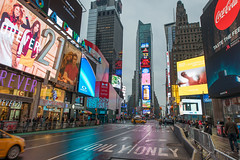 The Empire State Building is one of the tallest buildings in North America, and a NYC icon. 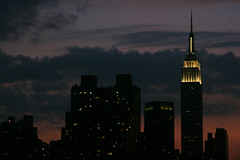 Originally New York comprised of a series of villages built by the Lenape Native Americans. Since then, New York has played host to people from all over the world, making it one of planet earth's most diverse cities. The Dutch were the first Europeans to arrive and established the city of New Amsterdam in Lower Manhattan in the early 17th century. After a war, the Dutch city of New Amsterdam became the British city of New York and the primary trading center for the thirteen colonies. Immigrants started arriving to New York from all over Europe, and later the world. Eventually, these colonists would gain independence and New York would join the United States.

Although equality was promised to all, all didn't mean everyone. It is a common myth that slavery didn't exist in northern states. Enslaved Africans built the city from the ground up, and continued to be enslaved even after slavery was made illegal in New York because many owners were unwilling to give up what they considered to be their property. New York would remain at the forefront of the long battle African Americans had and still have against racism in America. In the 19th century, New York would become an important innovator in technology with many new inventions in transportation technology including the earliest automobiles being tested in New York. Today, New York has both the largest and lowest performing transportation system in North America. During the 20th century, New York would manufacture much of the weapons needed to win the World Wars. After the war, even more immigrants poured into the state looking for jobs in industries that range from banking to mining. Today, New York is the second-largest city in North America after Mexico City, and the 11th largest city in the world, ahead of Karachi, Pakistan and behind Osaka, Japan.

New York is accessible by two main airports including John F. Kennedy International Airport and LaGuardia International Airport. You can travel to Manhattan from both airports by yellow cab which will be more expensive than a regular Uber. Make sure to download the Uber app before traveling to New York.

For a cheaper link between Manhattan and the city's airports, you can use public transportation. When traveling from JFK, you can hop on an Air Train (not to be confused with the A Train) travel to Jamaica Station and then transfer to the E Train which will take you to Midtown and Lower Manhattan. From LaGuardia Airport you can take a bus to the nearest subway station in Astoria and transfer to the N, Q, W or 7 subway lines.

If arriving from the city's third airport, Newark, you can either take taxi or the Express Bus.

If you're going to be moving a lot around the city, you should buy a Metrocard but there are many different types so make sure to NOT overpay and find the right option for you.

The city's upstate regions are mostly accessible by Metro North and Amtrak as well as Greyhound buses, but this will depend on your destination. When traveling on a Greyhound, make sure to sit in the front or the middle of the bus because many buses have broken engines and gasoline pours into the back of the bus, making it difficult to breathe.

New York is a fairly safe state but not the safest. There are still necessary precautions that need to be taken and neighborhoods to be avoided. Staying in Midtown and Lower Manhattan are the best bets for safety.