Welcome to Brunei. Brunei is a small nation in Southeast Asia that is completely surrounded by Malaysia. It is known for being one of the world's largest oil producers.

These stats were collected through general studies by prominent institutions that analyzed Brunei's tourism sector. They represent Brunei as a whole, not certain parts of the country that are either better or worse-off. These studies were then summarized into a given rating.

O.A Saifuddien Mosque is an ornate gold-domed mosque in Brunei. 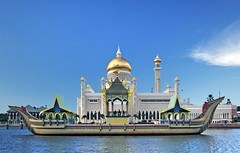 Istana Nurul Iman is a royal palace and mosque in Brunei.

Ulu Temburong National Park is one of the largest and most well-known national parks in Brunei.

Get a visa for Brunei...

Before Chinese settlement, Brunei was a major trading hub on the Malay peninsula. Chinese settlement and Islamization began in the 15th century when Brunei began to grow even further. Even more than Malaysia, Brunei was always tied culturally and ethnically closer to China than to India and the other Malay states. An important trade route connected Brunei to China’s capital Nanjing. The Portuguese were the first Europeans to arrive in Brunei. The British established a semi-protectorate over Brunei, with the Sultan of Brunei still running the country, and Brunei began largely an autonomous region within the British Empire. This ended in 1984. Today, Brunei is one of Asia's richest countries due to oil production.

"Boats, known locally as water taxis, are some of the more popular modes of public transport in Bandar Seri Begawan. Some water taxis double up as a tour guide taking passengers out onto the Brunei River. For longer distances, boats become a convenient way to pass between the Sultanate's two separated regions." - Culture Trip

See if you can travel to Brunei visa-free