Welcome to Cambodia. Cambodia is a country in Southeast Asia known for its ancient history, that starts with the ancient Khmer people, who grow to conquer enormous part of the Asian continent. Today, Cambodia is a middle-income Southeast Asian nation that is growing fast.

These stats were collected through general studies by prominent institutions that analyzed Cambodia's tourism sector. They represent Laos as a whole, not certain parts of the country that are either better or worse-off. These studies were then summarized into a given rating.

Phnom Penh is the capital and largest city of Cambodia. 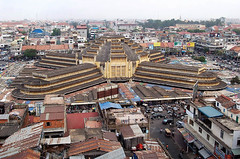 The Angkor Wat is a massive Cambodian temple. 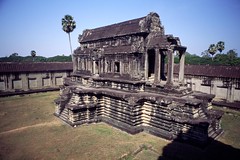 The Bayon Temple is a Cambodian temple known for its smiling faces.

Get a visa for Cambodia...

The first civilization in Cambodia was established in the 1st century and was known as the Kingdom of Funan. It was based on Chinese principles. Trade with China grew rapidly between the third and fourth centuries. The Funan Kingdom was succeeded by the Chenla Kingdom in the 6th century and later by the Khmer Empire in the 9th century. After the establishment of the Khmer Empire, Cambodia truly prospered. The country controlled much of Thailand, Vietnam, and Laos. Cambodia was colonized by France in 1863 and gained its independence in 1953. After independence, a civil war broke out in the new nation, and another war with Vietnam, didn’t help the matter. Today, however, Cambodia is one of the world's most peaceful countries and it is waiting for you to come and explore.

"The types of standard public transport you will find in Cambodia are the 'tuk-tuk', the 'moto', the two different manners of taxi service, public utility vans and the recent city-routes buses and three-wheeled cabs." - HowToGoToCambodia.com

See if you can travel to Cambodia visa-free