Welcome to Costa Rica. Costa Rica is a country in Central America that is known for its national parks, river rafting, canyoning, cave tubing, and zip lining.

These stats were collected through general studies by prominent institutions that analyzed Costa Rica's tourism sector. They represent Costa Rica as a whole, not certain parts of the country that are either better or worse-off. These studies were then summarized into a given rating.

San Jose is the capital and largest city of Costa Rica. 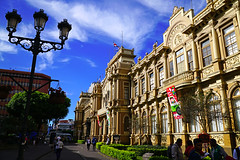 Cartago is a city in Costa Rica that is known for its religious heritage.

Get a visa for Costa Rica...

Before European arrival, Costa Rica was settled by various indigenous tribes who were later colonized by Spain. In 1821, Costa Rica became a part of the First Mexican Empire and was also a part of the Central American Federation. A democratic government was established in 1869. Although there was a brief dictatorship in the early 20th century, democracy was restored and Costa Rica has remained ever since, one of the richest and safest countries in Central America.

"There are a variety of options for moving between destinations in Costa Rica - domestic flights, rental cars, shuttles, private vans, ferries, public bus, and even horseback. Your travel routes, budget, and length of stay are all important factors to consider when deciding on one or a combination of these options, and the guide below can help with a detailed description of each travel mode. While transportation modes may vary in flexibility and comfort, each is an opportunity to take in Costa Rica’s amazing scenery." - Anywhere.com

See if you can travel to Costa Rica visa-free