Welcome to Cyprus. Cyprus is an island country in the Mediterranean Sea and one of two island countries in Southern Europe. It is known for its beaches, history, cuisine, and natural beauty.

This map is currently unavailable as a result of Cyprus-Turkey border disputes.

These stats were collected through general studies by prominent institutions that analyzed Cyprus's tourism sector. They represent Cyprus as a whole, not certain parts of the country that are either better or worse-off. These studies were then summarized into a given rating.

Nissi Beach is a famous beach in Cyprus. 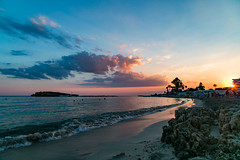 Nea Paphos is a famous Roman ruin in Cyprus.

Get a visa for Cyprus...

During ancient times, Cyprus was divided between multiple city states and the rising Macedonia. The country also had ties with the Phoenicians. Cyprus became a Roman province in the 1st century BCE. After the collapse of the Roman Empire, Cyprus joined the Byzantine Empire and gained independence in the 13th century; the Kingdom of Cyprus was established. Cyprus was later conquered by the Ottoman Empire but liberated after the Russo-Turkish wars of the 19th century. Cyprus became a British protectorate in 1878 but regained independence in 1960. The country was pulled into a conflict with Turkey that resulted in the breakup of Northern Cyprus from the south.

"Aside from moving around on foot and by bike, you can also travel around the island by bus or taxi. Cyprus does not have a train or underground transport system." - VisitCyprus

See if you can travel to Cyprus visa-free