Welcome to Estonia. Estonia is a country in the Baltics region of Eastern Europe that is known for the beautiful old town of Talinn and its medieval architecture.

These stats were collected through general studies by prominent institutions that analyzed Estonia's tourism sector. They represent Estonia as a whole, not certain parts of the country that are either better or worse-off. These studies were then summarized into a given rating.

Tallinn is the capital and largest city of Estonia. 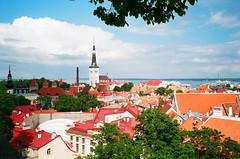 Tartu is a major city in Eastern Estonia.

Get a visa for Estonia...

The history of modern Estonia starts in the 12th century when the country was one of the last in Europe to be Christianized. After this, Estonia fell under the control of Germany, in the 13th century, after which it fell under the control of Denmark, during which many immigrants from Northern Europe, specifically Sweden, moved into the country. Estonians became Protestants in the 16th century. In 1561, Estonia was divided between a region controlled by Sweden in the north and a region controlled by Poland in the south. In the 17th century, Poland lost all control of Estonia, and the Polish territories were put under Swedish control. After the defeat of Sweden in the Great Northern War, Estonia became a part of the Russian Empire in the 18th century. In the 19th century, there was a large movement of Estonians against Russian rule, although the country moved closer towards the Russian Orthodox Church.

During World War One, after declaring independence, Estonia was occupied by Germany. After World War One, Estonia gained independence and established a largely socialist system. After a Soviet military intervention, the Soviet Union gained control of Estonia during the beginning of World War Two, but the country was later occupied by Germany. The Holocaust killed many Estonian Jews during this time. After the end of World War Two, control of Estonia reverted back to the Soviet Union and many Estonians suffered during the Stalinist period. After the end of the Stalinist Period, the government in Moscow sent large investments into Estonia, and established the country’s first tv and radio stations. Estonia hosted the Olympic Games in 1980. Estonia gained independence from the USSR in 1991, and quickly joined NATO and the EU.

"Trains in Estonia are run by Elron (domestic services) and Go Rail (services to destinations in Russia). You can buy tickets online, at relevant train stations or through an agent. Tickets can also often be bought on the train (sometimes only with bank cards). Train within Tallinn is free to Tallinn residents." - WorkInEstonia

See if you can travel to Estonia visa-free