Singapore is a city state and island in Southeast Asia, located near Malaysia and Indonesia. The city is the largest business hub in the region and one of the largest epicenters of commerce and technology in the world.

To learn more about traveling to Singapore, watch our Singapore vacation travel guide video. This is an ad for another Tripetta service approved by Tripetta.

These stats were collected through general studies by prominent institutions that analyzed Singapore's tourism sector. They represent Singapore as a whole, not certain parts of the city that are either better or worse-off. These studies were then summarized into a given rating.

Marina Bay is the new downtown of Singapore, home to the Marina Bay Sands Hotel, that is situated on a waterway of the same name. 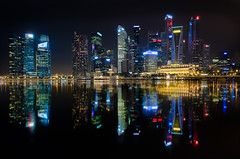 The Merlion is an iconic half-lion, half-fish statue in Singapore.

Sentosa Island is an island in Southern Singapore, that is home to a popular resort, and many hotels. The island is one of the epicenters of tourism in Singapore. 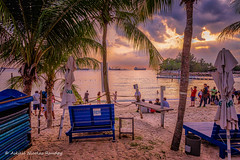 Get a visa for Singapore...

Singapore Island was originally inhabited by pirates and fishermen and served as a military outpost of the Srivijaya Empire. The island was repeatedly invaded by powerful South Indian kingdoms as well as Java. In 1819, Sir Stamford Raffles of the English East India Company landed at Singapore and purchased the island from the island’s chief. In 1851, after England lost the monopoly on the China Trade, the possessions of Singapore and much of Malaya fell under the supervision of the Governor-General of India. A major British naval base was established on the island in the 1920s. After World War One, the city became a major port, one of the largest in Southeast Asia. Singapore was occupied by Japan throughout the course of World War Two. The city state gained its independence in 1959 but still retained friendly relations with the UK. Since independence, Singapore has become the primary business hub in Southeast Asia and one of the largest ports in the world.

"The best way to get around Singapore is via its Mass Rapid Transit (MRT) subway system. This underground network has lines that stretch across the entire city. However, once you're in the desired neighborhood, walking is your best option." - US News Travel

Make sure you know Singapore's laws well, or else you might be fined!

See if you can travel to Singapore visa-free