Welcome to Iceland. Iceland is an island country in Northern Europe that is known for its beautiful nature and long history.

These stats were collected through general studies by prominent institutions that analyzed Iceland's tourism sector. They represent Iceland as a whole, not certain parts of the country that are either better or worse-off. These studies were then summarized into a given rating.

Thingvellir National Park is a famous national park and historic area in Iceland. 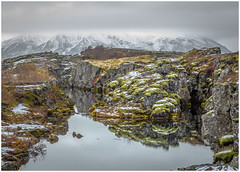 Vatnajökull National Park is a national park in Iceland that is known for its waterfalls and volcanoes.

Get a visa for Iceland...

The first settlers to arrive in Iceland were the Vikings in the 9th century. Many people fled to Iceland between the 10th and 12th centuries to escape oppressive kings in Norway and Scotland. After a civil war in the 11th and 12th centuries, Iceland joined the Kingdom of Denmark. After this, life in Iceland remained mostly unchanged until the independence movement of the 19th century. Iceland gained independence from Denmark in 1874 and supported the United Kingdom during the First World War. During the Great Depression, Iceland’s economy collapsed and the country remained neutral during the Second World War, even though, Denmark was occupied by Germany. After the war, Iceland’s economy started to recover and the country joined NATO and became a democracy.

"Iceland's only public transport network is a bus service. This is run by the government and is a convenient way to get around in Reykjavík and the surrounding areas. Official bust stops are found throughout the city, and all of them have the time table and bus route available there." - GuideToIceland

See if you can travel to Iceland visa-free