Welcome to Laos. Laos is a country in Southeast Asia that borders Myanmar, Thailand, Cambodia, Vietnam, and China. It is known for its ancient captal, Vientiane, and natural beauty.

These stats were collected through general studies by prominent institutions that analyzed Laos's tourism sector. They represent Laos as a whole, not certain parts of the country that are either better or worse-off. These studies were then summarized into a given rating.

Vientiane is the capital and largest city of Laos. 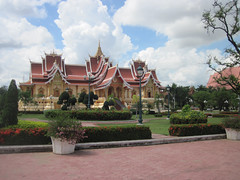 The Kuang Si Waterfall is one of the most famous waterfalls in the world. 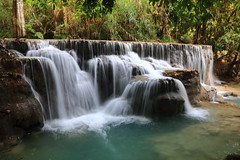 The Pha That Luang is a historic gold stupa in Vientiane. 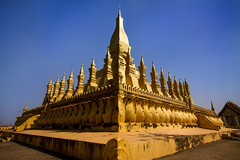 The first civilization in modern Laos was established in the 1st century, and was an Indianized kingdom known as Fushan. Fushan was quickly followed by the Champa kingdom, Chenla kingdom, and Khmer kingdoms before large migrations into Laos from Thailand and Southern China reshaped the region. One of the largest kingdoms in Southeast Asian history, Lan Xang was established in Laos in the 14th century. Regional kingdoms like Vientiane and Luang Prabang replaced Lan Xang in the 18th century. Laos was colonized by France in 1893 but regained independence in 1953, although the country was later torn apart in a devastating civil war. Today, Laos is a stable and relatively rich Asian nation.

"Laos is a country in Asia, which possesses a number of modern transportation systems, including several highways and a number of airports. As a landlocked country, Laos possesses no ports or harbours on the sea, and the difficulty of navigation on the Mekong means that this is also not a significant transport route. " - The Wikimedia Foundation

See if you can travel to Laos visa-free