Welcome to Malta. Malta is an island country in the Mediterranean Sea and one of two island countries in Southern Europe. It is known for its beaches, history, cuisine, and natural beauty.

These stats were collected through general studies by prominent institutions that analyzed Malta's tourism sector. They represent Malta as a whole, not certain parts of the country that are either better or worse-off. These studies were then summarized into a given rating.

Comino is a famous island in Malta. 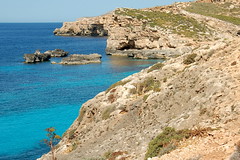 The Azure Window is a collapsed natural arch above an ocean setting in Malta.

The first civilization to arrive in Malta were the Phoenicians, based in Carthage, who were subsequently conquered by the Roman Empire. Roman rule was briefly followed by Byzantine rule before Malta was invaded by Arabs from North Africa. The country returned to Christianity after the Norman Conquest and joined the Kingdom of Sicily in the 12th century. Sicilian rule was followed by Spanish rule which lasted from the 16th to 18th centuries. Malta was occupied by France for two years between 1798 and 1800. In 1800, Malta voluntarily joined the British Empire as a protectorate but regained independence during the decolonization era of the 1960s.

"The public bus service on Malta and Gozo is a good way to get around as buses serve the major tourist areas, go practically everywhere and are inexpensive and efficient. You can downlaod a Route Map from here. Renting a car is a good option if you want to get to the farther reaches of the island." - VisitMalta

See if you can travel to Malta visa-free