Welcome to St. Petersburg. St. Petersburg is the second-largest city and former capital of Russia as well as the largest city in Northern Europe after London. The city is located near the border with Finland and Estonia, and is also a major business center.

To learn more about traveling to St. Petersburg, watch our St. Petersburg vacation travel guide video. This is an ad for another Tripetta service approved by Tripetta Russia.

These stats were collected through general studies by prominent institutions that analyzed Russia's tourism sector. They represent Russia as a whole, not certain parts of the city that are either better or worse-off. These studies were then summarized into a given rating.

Savior on the Spilled Blood Church

The Savior on the Spilled Blood Church is a historic church in St. Petersburg. 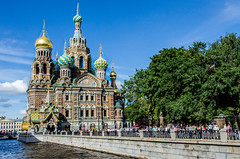 The Peterhof Palaces are a complex of palaces and gardens located outside St. Petersburg that was the summer residence of the Russian tsar. 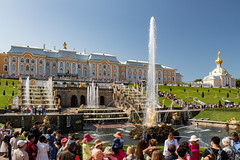 The Hermitage Museum is the largest museum in the world, even larger than the Louvre, that offers artworks from all countries collected by powerful Russian leaders throughout the history of the Russian state.

St. Petersburg was founded in 1703 by Peter the Great on land seized from Sweden. The tsar's dream was to build a modern capital, and for this work he hired some of the best architects of the time. They built beautiful city avenues, European-style buildings and large cathedrals similar to those of Rome. In the 19th century many of the most famous Russian writers lived in the city, including, Gogol and Dostoevsky.

The main events of the First Russian revolution took place in St. Petersburg. This led to the creation of the Duma and eventually led to the rise of Vladimir Lenin, who moved the capital back to Moscow. During World War Two, the city was severely damaged when German troops imposed a blockade. Millions of St. Petersburg citizens died of starvation. After the war, the city was completely ignored by the Soviet Government. Many of the famous cathedrals were abandoned or turned into museums, such as the Museum of Communism. When the Soviet Union collapsed and the Russian Federation was formed, money flowed into the city to renovate the city's historic buildings. Today, Saint Petersburg is a major tourist center, as well as a major business center.

St. Petersburg is a very safe city so basic safety precautions should be enough. However, St. Petersburg suffers brutally cold winters, so, unless you want to freeze to death and drown in rain and snow mush, you should visit St. Petersburg ONLY in the summer.