To learn more about traveling to Thailand, watch our Bangkok vacation travel guide video. This is an ad for another Tripetta service approved by Tripetta.

These stats were collected through general studies by prominent institutions that analyzed Thailand's tourism sector. They represent Thailand as a whole, not certain parts of the country that are either better or worse-off. These studies were then summarized into a given rating.

The Grand Palace is the former residence of the Thai monarchy converted into a museum.

Wat Arun Ratchawararam Ratchaworamahawihan is a sacred temple in the Bangkok Yai District of Bangkok. 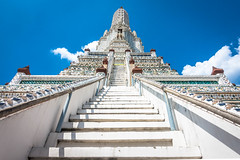 Similan is a national park known for its beaches. 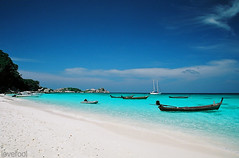 Get a visa for Thailand...

Thailand's earliest inhabitants were hunter-gatherers. This all changed when rice farming was discovered which increased food deposits and allowed civilization to develop. The use of stone tools allowed for more productivity. Iron and bronze were discovered. By the 2nd century, Thailand's indigenous tribes formed small self-governing Buddhist states called the Meuang.

The Meuang states fell after the rise of the Khmers. The Khmer Empire was founded in modern Cambodia, and are famous for building beautiful temples. One of their masterpieces is the world-famous Angkor Wat.

The first Europeans to arrive in Thailand were the Portuguese in the mid-17th century. They were closely followed by the Dutch, English, and French. A Greek called Constantine Phaulkon even served in the Thai Government. He was removed after illegally stationing French soldiers in Thailand. After this, Thailand decided to isolate itself from the world.

The Burmese captured and destroyed the capital of Ayutthaya (the capital was also called Ayutthaya) in the 18th century. They were quickly removed by General Taksin. He started building up an empire and his territory included much of Southeast Asia, even Laos. The Thai were later forced to cede Laos to the French.

In the early 20th century, a revolution made Thailand a constitutional monarchy. This could be the most pivotal moment in the country’s history. This is because this revision made Thailand more democratic and aligned it with the United States. Thailand supported the Allied Powers during both the First and Second World Wars. However, Thailand was also very sympathetic towards Japan during the Second World War and was soon occupied by Japanese forces. Thailand then declared war on both Britain and the United States but relations with both were soon restored. Thailand supported the United States during the Cold War.

Today, Thailand is a modern country with some of the best tourism infrastructure in Southeast Asia. The country is known for its beautiful temples and food. Many travelers say Thailand has the best food in all of Asia.

" Flying is obviously the most expensive but quickest way to get around. Thailand is one of the few countries in the region with a decent rail network. As trains don't go everywhere in Thailand, taking the bus is your second-best option. Don't rent a car in Thailand." - NomadicMatt.com

See if you can travel to Thailand visa-free