Bahnhofstrasse is the main street of Zurich. 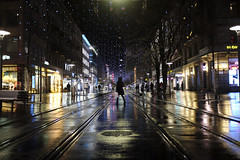 Fraumunster Church is a famous 11th century church in Zurich. 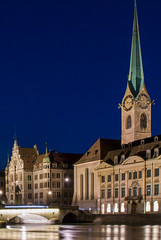 Uetliberg is a famous mountain in Zurich.

Grossmunster are famous twin towers in Zurich that feature an observatory for visitors.

Lake Zurich is a famous lake in Zurich with the Ganymede Statue and views of the Swiss Alps.

Sechselautenplatz is the central square of Zurich.

Lindenhof is a historic park in Zurich.

The Old Town of Zurich is the historic heart and epicenter of Zurich.

Zurich has a mild climate with cold winters and warm summers.

Question: What is the ideal time to visit Zurich?

Answer: The best time to visit Zurich is between May and July.

Although German, French, and Italian are all spoken in Switzerland, the primary language spoken in Zurich is German. Here are some common words and useful phrases in German.

Let's get to the good stuff (German edition)...

Although originally settled during Neolithic times, Zurich was a part of the Roman provinces of Gallia Belgica and later of Germania Superior. The area was Christianized in the 3rd century. Zurich joined France in the 8th century and a Carolingian castle was constructed in the city. The city later joined the Holy Roman Empire. Zurich joined the Swiss Confederation in the 14th century and many former Swiss provinces joined Zurich in the 15th century. Zurich was the site of a brutal war with France in the 1470s. Multiple monasteries were constructed in the city in the early 16th century and Zurich played a significant role in the Protestant Reformation. Zurich became a democratic city in the early 18th century when it gained an elected city council. Zurich was conquered by the army of Napoleon Bonaparte when France invaded Switzerland during the Napoleonic Wars, but was liberated with the help of Russia and Austria. Zurich continued to grow in the 20th century and today is one of Europe’s most modern and vibrant cities.

"Zurich Public Transport (VBZ) employs a network of trams, trains, buses, cable cars and boats to help travelers traverse Zurich and its suburbs. The trams, in particular, are a good way to get around. Before you hop aboard, make sure you buy your ticket at a VBZ ticket office or an automatic ticket machine." - USNews

Book a trip to Zurich