Welcome to American Samoa. Located near Samoa (the country), American Samoa is a US Overseas Territory famous for its beaches and tropical resorts. This destination profile page was built for you to better understand American Samoa.

To learn more about traveling to American Samoa, watch our American Samoa vacation travel guide video. This is an ad for another Tripetta service approved by Tripetta.

These stats were collected through general studies by prominent institutions that analyzed American Samoa's tourism sector. They represent American Samoa as a whole, not certain parts of the territory that are either better or worse-off. These studies were then summarized into a given rating.

The National Park of American Samoa is a national park that is famous for its many hiking and snorkeling hotspots. 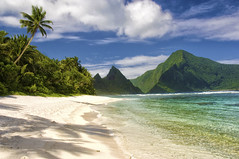 Manu'a is an archipelago in American Samoa. 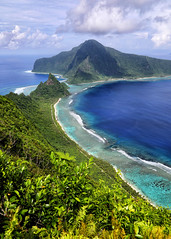 Anu'u is a small volcanic island off the shores of Tutuila.

Polynesians had lived on American Samoa for nearly two thousand years before Jacob Rogeeven, a Dutch navigator, sighted American Samoa in 1722. The London Missionary Society sent its first representatives to the island in the 1830s. In 1878, the United States signed a treaty with the Government of Samoa to establish a military base on Pago Pago. In the early 20th century, the western part of Samoa (now the country Samoa) was annexed by Germany, while the eastern part (now American Samoa) was annexed by the United States. The territory was administered for 50 years by the US Navy. After many protests and petitions, the territory elected its first governor in 1977 and four years later a Samoan was appointed to the House of Representatives. Although shaken by an earthquake in 2009, American Samoa quickly recovered and is now a major tourist destinations.

"The island of Tutuila has public transportation (frequent, but unscheduled) via "aiga" or "family" buses. For 50 cents to two dollars, you can be driven around Pago Pago Harbor and to the more remote parts of the island. You can wave buses to stop or be dropped off anywhere they can safely pull off of the road." - The National Park Service

American Samoa is one of the safest places in the US. Make sure your trip is eco-friendly and you are not mindlessly throwing your trash on this island's beautiful beaches.