Welcome to Bolivia. Bolivia is a landlocked country in South America that is known for its ancient traditions, natural beauty, and capital, La Paz.

La Paz is the capital and largest city of Bolivia. 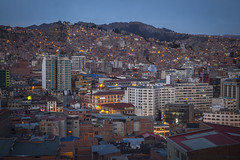 Sucre is a major city in Southern Bolivia.

Get a visa for Bolivia...

The history of Bolivia starts with the indigenous tribes who were conquered by the Spanish Empire in the later Middle Ages. Christianity became the primary religion during this time. During Spanish rule and the rule of the Viceroyalty of Peru there were frequent protests by the Native Americans, to retain their rights and freedoms. After independence in the 19th century, Bolivia became a brutal military state and a conflict broke out with neighboring Chile, during which the country lost its Pacific coast. In the latter half of the 20th century, Bolivia opened up and foreign companies were allowed to do business in the country; this boosted the economy.

"The most common form of transportation in Bolivia for both travellers and locals is by bus. It is almost impossible not to take a bus in Bolivia. There are local buses called Micros and Trufis, and then there are long distance options like public buses and Bolivia Hop." - BoliviaHop

See if you can travel to Bolivia visa-free