Welcome to Chile. Chile is a country in South America that sits on the Pacific Coast. It is known for its natural beauty, beaches, and culture.

Santiago is the capital and largest city of Chile. 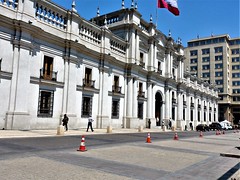 Punta Arenas is one of the world's southernmost cities.

The first European to arrive in Chile was Fernando de Magallanes, who did so at the beginning of the 16th century. The city of Santiago was founded in 1541. Although Chile came under Spanish colonization, because many of the southern parts of Chile were remote, it was difficult for the Spanish to exercise control outside of Santiago. Chile gained independence in 1810 and the first democratic government was established in 1818. Beginning in 1830, Chile shifted to a more conservative ideology, but the Liberals regained power in the 1860s. After deep political division, it was decided that the government should be dominated by Parliament, but power passed to the president in the early 20th century. A military dictatorship was established in 1970, but a democratic government replaced the military dictatorship in 1990.

The main forms of transportation in Chile are public buses.

See if you can travel to Chile visa-free