Colombia is a country in South America that is known for its beautiful architecture, delicious food, and welcoming people.

To learn more about traveling to Colombia, watch our Cartagena vacation travel guide video. This is an ad for another Tripetta service approved by Tripetta.

These stats were collected through general studies by prominent institutions that analyzed Colombia's tourism sector. They represent Colombia as a whole, not certain parts of the country that are either better or worse-off. These studies were then summarized into a given rating.

Bogota is the capital and largest city of Colombia and its cultural epicenter. 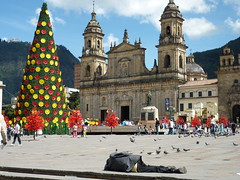 Cali is a city in Southern Colombia that is known for its salsa dance clubs.

Cartagena is a historic port city on Colombia's Caribbean Coast. 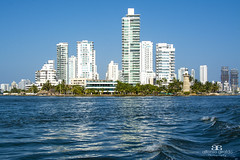 Get a visa for Colombia...

The first humans to arrive in Colombia were indigenous hunter-gatherer peoples, approximately fifteen thousand years ago. The first European to explore Colombia was the Spaniard Alonso de Ojeda in the late 15th century. In the 16th century, the Spanish made their first settlement at Santa Marta and Pedro de Heredia founded Cartagena in 1533. Cartagena grew rapidly as a result of the Gold Trade with the local Sinu people. Bogota was founded in 1538 on the site of a Muisca village called Bacata. Bogota became the capital of the Kingdom of the New Granada, a collection of Spanish colonies in South America, in 1549. The city became one of the largest Spanish-speaking cities in the world, alongside the likes of Madrid, Barcelona, Mexico City, and Lima. A war for independence was fought in the early 19th century and the country of Gran Colombia, a union between Colombia, Venezuela and Panama (then a part of Colombia), was founded.

The union between the two countries dissolved in 1830 and Colombia was renamed the Republic of New Granada. The name would later be changed to the United States of Colombia in 1863, and finally to the Republic of Colombia in 1868. Civil War broke out between the country’s two main political parties in 1899. Another civil war called La Violencia broke out in the 1950s after the assassination of a popular liberal canditate. Panama declared its independence from Colombia after the war. After the civil war, Colombia lost its reputation for prosperity and became the epicenter of Latin America’s drug trade. Things evened out in the 1990s, after the shootout of Pablo Escobar in Medellin. Since then, Colombia has once again become a safe and rich South American country. Its economy is driven by the tourism and coffee industries.

"Transport in Colombia is regulated by the Ministry of Transport. Road travel is the main means of transport; 69 percent of cargo is transported by road, as compared with 27 percent by railroad, 3 percent by internal waterways, and 1 percent by air." - The Wikimedia Foundation

Colombia is a very safe country. Keeping your caution and belongings near you is still very important. Happy traveling!

See if you can travel to Colombia visa-free