Welcome to Denmark. Denmark is a country in Northern Europe that is known for its high quality of life, innovation, and unique chocolates.

These stats were collected through general studies by prominent institutions that analyzed Denmark's tourism sector. They represent Denmark as a whole, not certain parts of the country that are either better or worse-off. These studies were then summarized into a given rating.

Copenhagen is the capital and largest city of Denmark. 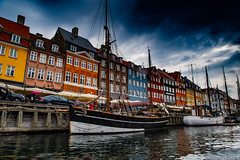 Odense is a major city in Central Denmark. 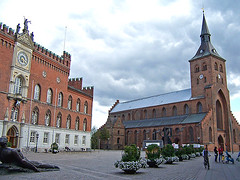 Get a visa for Denmark...

The history of Denmark as a unified kingdom began in the 8th century, when the Vikings rapidly expanded their influence across Europe. During this time, Danish Vikings set up important trade routes between Northern Europe and Eastern Europe, connecting the country with Russia and Ukraine. The Vikings also conquered large parts of Britain, France, and Ireland and also invaded Spain, Italy, and Portugal. In the 11th century, after France started to gaining more power, and rapidly expanded across Europe, Denmark and France came into a large conflict. In the 11th century, Denmark also colonized Iceland and Greenland. In the 12th century, Christianity was widely adopted in the country. In the 13th century, Denmark expanded into the Baltics, and conquered Estonia. During the 14th century, Denmark suffered after the arrival of the Black Death. After this, Denmark formed a union with Norway. In the 16th century, the Bible was translated into Danish and the Reformation started. In the 17th century, Denmark formed another union with Germany, then known as the Holy Roman Empire. The country also formed an alliance with Russia against Sweden during the Great Northern War. In the 18th century, Denmark colonized several islands in the Americas, which were later sold to the United States. After the Napoleonic Wars, the Denmark-Norway union was dissolved and progressivism was introduced. During World War Two, Denmark was occupied by Germany, although it soon regained its independence. The country joined NATO and the EU

"Public transport in Copenhagen is inexpensive and easy to use. You can pay per journey in cash at a machine in a metro or train station, or in person on a bus. Copenhagen is divided into zones and fares depend on how many zones you are travelling through." - VisitDenmark

See if you can travel to Denmark visa-free