Welcome to Ecuador. Ecuador is a country on the Pacific coast of South America that is famous for its Andes mountains, beaches, and Galapagos Islands.

Quito is the capital and largest city of Ecuador. 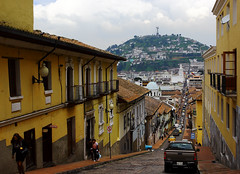 The Galapagos Islands are a chain of islands in Western Ecuador that are known for their natural beauty.

Get a visa for Ecuador...

The first to arrive in Ecuador were a series of indigineous tribes who formed the Kingdom of Quito but were later conquered by the Inca Empire in the Middle Ages, and later by the Spanish. Under Spanish rule, which started in the 16th century, Ecuador was under the rule of the Viceroyalty of Peru, although control of the colony was handed over to Colombia in the 18th century. In the 19th century, Ecuador gained independence from Spain and Colombia and became a democracy. Its economy was largely based on the coastal industries that emerged in the west of the country and today one of the main industries is tourism.

"Ecuador is the fourth smallest country in South America and easy to travel around in. There is extensive bus service in the larger cities. Quito has a modern 'trolebus' (busses that run on separate tracks throughout the city like trolleys) system that is fast and cheap." - South America Living

See if you can travel to Ecuador visa-free