Welcome to Canada. Canada is a country in North America that is famous for its natural beauty, ski resorts, and large cities, like Toronto, Vancouver, and Calgary.

These stats were collected through general studies by prominent institutions that analyzed Canada's tourism sector. They represent Canada as a whole, not certain parts of the country that are either better or worse-off. These studies were then summarized into a given rating.

Toronto is the largest city and economic epicenter of Canada.

Montreal is a historic city in the province of Quebec in Canada. 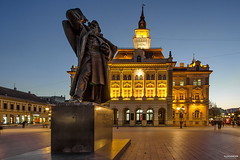 Ottawa is the capital and administrative epicenter of Canada.

Get a visa for Canada...

The history of Canada starts with the indigenous peoples who lived in Canada for centuries. They built the foundation of Canada's government and legal system and many of their principles and ideas are still applied in Canadian society today. The first Europeans to arrive in Canada were the Vikings in the 11th century who had also settled Greenland and Iceland. Knowledge of Canada spread throughout Europe and stories about life in Canada were written in England and Italy during the Renaissance. Eastern Canada was colonized by France in the early 16th century. Fur trading became the dominant industry in the 17th century. Quebec City, one of the earliest permanent settlements, was founded in 1608. Montreal and Toronto quickly followed. In the late 17th century and early 18th century, immigrants arrived in Canada from the United Kingdom and settled in places like Newfoundland and Nova Scotia. After the Seven Years’ War, France was forced to give up its possessions in North America, except for the islands of St. Pierre and Miquelon, which are still French colonies today. During the American Revolution, Canada was invaded by the United States although British control was quickly restored. Canada gained independence from the United Kingdom in 1867 and set about building the Canadian Pacific Railway which better connected British Columbia with the provinces of Quebec and Ontario. During the First World War, Canada supported the Allied Powers and sent reinforcements to the British military in the fight against Nazi Germany. After being hit hard by the Great Depression in the 1930s, Canada supported the Allied Powers again during the Second World War. After the war, Canada became one of the most progressive countries in the world and one of the first adopters of universal healthcare.