Welcome to Georgia. Georgia is a country in the Caucasus that borders Russia, Azerbaijan, Armenia, and Turkey. It is known for its tasty wine, Black Sea Coast, architecture, and natural beauty.

This map is currently unavailable as a result of Georgia-Russia border disputes.

Targeted groups: US minority groups and government employees, nationals of the Russian Federation and Armenia

These stats were collected through general studies by prominent institutions that analyzed Georgia's tourism sector. They represent Georgia as a whole, not certain parts of the country that are either better or worse-off. These studies were then summarized into a given rating.

Tbilisi is the capital and largest city of Georgia. 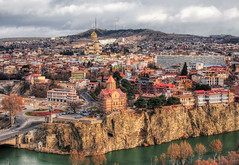 Mtskheta is the religious epicenter of Georgia. 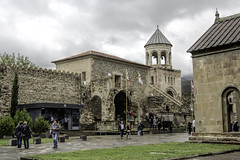 Vardzia is a historic cave monestary in Southern Georgia.

Get a visa for Georgia...

The first Georgian state was formed in the 13th century BC and was called the Kingdom of Colchis. The Colchis kingdom was formed in Western Georgia on the Black Sea coast. In the south and east of the country lay the Kingdom of Iberia (not to be confused with the Iberian Peninsula), which, if it existed today, would also control parts of Armenia and Turkey. This first Georgian state often traded with Ancient Greece, and Georgian traders were frequently mentioned in Greek literature. In the 1st century BC. Georgia was captured by Ancient Rome, and the centuries-old rivalry between Rome and Persia began. Colchis became the Roman province of Lazikum. Georgia was converted to Christianity in the 1st century, and control over the entire province of Lazikum was transferred to Persia in the 4th century. Georgia reunited again in the Middle Ages, and although it was part of the Byzantine Empire, the region was largely self-governing. However, soon Georgia was attacked by the Seljuk Turks. The country soon gained independence and attacked parts of Eastern Turkey in the 13th and 14th centuries. During the 16th century, most of Georgia's neighboring countries became Islamic, and Georgia was the only Christian country in the Caucasus. Many of the country's old trade routes were cut off by the Turks or Iranians. This was with the exception of the strategically important trade route to the Crimean Peninsula, through which Georgia was connected with the port cities of Italy. In the 18th century, Georgia was captured by the Russian Empire. Georgia and Russia had much more in common than Georgia and Iran, so during the Russian annexation the lives of Georgians did not change significantly. The serfs were still ruled by a powerful elite, and Georgia's economy continued to be based on agriculture and wine production. In 1918, during the Russian Revolution, Georgia declared its independence. It didn't actually work, as Georgia found itself in a three-year conflict with neighboring Armenia and then attacked by Russia. Georgia joined the Soviet Union in 1921. During the Soviet period, Georgia was one of the most economically stable Soviet republics and the epicenter of the Soviet tourism industry. Since re-proclaiming independence in the 1990s, Georgia has again come into conflict with Russia, and many of the border disputes with the Russian Federation are still ongoing.

"There are buses that operate within the country and cover the main cities of Georgia. However, locals rarely use them, as they prefer to drive, take trains or ride marshrutkas. There are several bus stations depending on the region you'd like to go." - Culture Trip

See if you can travel to Georgia visa-free