Welcome to Greenland. Greenland is a territory of Denmark in Northern Europe and North America that is also the world's largest island. It is known for its ice caps and cold climate.

These stats were collected through general studies by prominent institutions that analyzed Greenland's tourism sector. They represent Greenland as a whole, not certain parts of the country that are either better or worse-off. These studies were then summarized into a given rating.

Nuuk is the capital and largest city of Greenland. 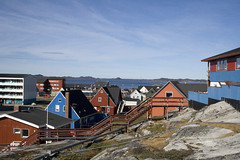 Godhavn is a major city in Western Greenland. 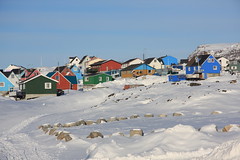 The history of Greenland begins with Viking settlers. After the arrival of the first settlers, Greenland became a part of the Kingdom of Denmark. In the 19th century, Greenland didn’t gain independence as did its eastern neighbor, Iceland. A US military base was built in the country in the 20th century. Today, Greenland continues to be a territory of Denmark.

"The transportation system in Greenland is very unusual in that Greenland has no railways, no inland waterways, and virtually no roads between towns. Historically the major means of transportation has been by boat around the coast in summer and by dog sled in winter, particularly in the north and east." - The Wikimedia Foundation

See if you can travel to Greenland visa-free