Welcome to Jordan. Jordan is a country in the Middle East that is known for its various historical sites, the Jordan River, Mount Nebo, Madaba, and many medieval mosques and churches.

These stats were collected through general studies by prominent institutions that analyzed Jordan's tourism sector. They represent Jordan as a whole, not certain parts of the country that are either better or worse-off. These studies were then summarized into a given rating.

Amman is the capital and largest city of Jordan. 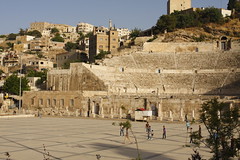 The Jordan River is a major river in Eastern Jordan.

The first mention of civilization in Jordan comes from the Bible, when the country was divided into three kingdoms. Even in those ancient times, the country's close proximity to Israel often brought the two nations into conflict. The country was also often invaded by the Assyrians and Neo-Babylonians. The country really prospered during the Hellenistic rule of the Seleucids and Ptolemies, when trade increased and wealth from all over the world passed through Jordan to Europe, East Asia and Africa. Hellenistic rule was replaced by the Romans, who conquered the region in the first century BC. Christianity became the official religion in the 4th century, but it was stopped in the 7th century when Jordan (then ruled by Byzantium and Persia) was invaded by the Arabs, who also conquered most of modern-day Syria, Israel and Palestine. Shortly afterwards, the Crusaders invaded Jordan, but after major setbacks such as the Crusades, the Ottomans took control of the country. In the 19th century, refugees from the Caucasus (mostly Armenians and Azerbaijanis) moved to Jordan with the help of the German government, which at the time had close relations with Turkey. During World War I, Jordan supported Britain and in the 1920s declared independence from the Ottoman Empire. Despite official independence, the country's policy was almost entirely under British rule, which changed after the agreement signed in London after the end of World War II. In the 1950s and 1960s, Jordan came into a deadly conflict with Israel, which led to the assassination of the Jordanian king in Jerusalem. Jordan's economy and democracy began to grow; in the 2010s, Jordan continued to face allegations of corruption and crime in government, leading to major civil unrest in Amman and other cities.

"The most common way of getting around Jordan is by bus, most of which are fifteen- or eighteen-seater minibuses. Some larger buses and air-conditioned coaches also serve as public transport. Timetables are rarely in operation: buses tend to depart only when they're full." - RoughGuides

See if you can travel to Jordan visa-free