Welcome to Kyiv. Kyiv is the capital and largest city of Ukraine, as well as its cultural epicenter. The city is also home to some of Ukraine's main tourist attractions, including St. Sophia Cathedral.

To learn more about traveling to Kyiv, watch our Kyiv vacation travel guide video. This is an ad for another Tripetta service approved by Tripetta Ukraine.

These stats were collected through general studies by prominent institutions that analyzed Kyiv's tourism sector. They represent Kyiv as a whole, not certain parts of the city that are either better or worse-off. These studies were then summarized into a given rating.

St. Sophia Cathedral is one of the most beautiful churches in Eastern Europe, as well as one of the main churches of the Ukrainian Orthodox Church. 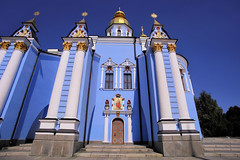 Kyev-Pechersk Lavra is one of the largest and historical monasteries in Ukraine. 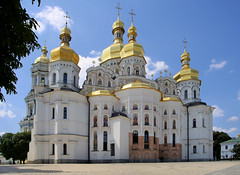 Independence Square is the central square in Kyiv.

Get a visa for Ukraine...

No one knows exactly when Kyiv was founded, but most historians agree that it was somewhere between the 5th and 8th centuries. The Vikings captured Kyiv in the ninth century, but the city quickly passed into the hands of Oleg of Novgorod (a.k.a. Oleg Novgorodsky), who made Kyiv the capital of a new state called Kievan Rus. The city prospered due to trade with the neighboring Byzantine Empire. Christianity was introduced to Kyiv in the 10th century, and the city became one of the largest spiritual centers in Eastern Europe. By the 12th century, four hundred churches (including the St. Sophia Cathedral) had been built in Kyiv. The city was completely destroyed in the XIII century after the Mongol invasion of Russia, leaving only 200 houses. In the 14th century, Kyiv joined the Grand Duchy of Lithuania, but was repeatedly invaded by Crimean Tatars. By the 16th century, after a treaty signed between Lithuania and Poland, Lithuania's Ukrainian lands were ceded to Poland.

After the uprising against Polish influence in the 17th century, control of Kyiv and Ukraine was transferred to Russia. Kyiv began to grow under Russia and became the the Russian Empire's industrial and manufacturing epicenter. At the beginning of the Russian Revolution, Ukraine declared independence from Russia and Kyiv was made the capital of the new Ukrainian state. Russia recognized this independent Ukraine, but the city was quickly captured by German troops during the First World War. After the war, Kyiv remained the capital of independent Ukraine, but the city was recaptured by Russia and briefly invaded by Poland. Control was soon transferred back to Russia, however. After surviving the brutal World War II, Kyiv continued to play its role as the industrial capital of the Soviet Union. After Ukraine declared independence from Russia, Kyiv became the capital of a newly independent Ukraine.

"Buses, trolleybuses, trams and subway are as commonly used in Kiev as private cars. You can save a lot on traveling using public transport, as it's the cheapest way to get around the city. A passenger fare is 50 kopiykas per ride, and this fare is the same for buses, trams, subway trains and trolleybuses." - Kyiv.info

Avoid getting into political discussions, especially, surrounding the situation in Luhansk, Donetsk, and Crimea, as each Ukrainian shares their own opinion on these issues. As in other countries, respect Ukraine's culture and take neccessary safety precautions. Kyiv is one of the safest cities in Ukraine, and is even safer than some Western European cities.

See if you can travel to Ukraine visa-free