Welcome to Latvia. Latvia is a country in the Baltics region of Eastern Europe that is known for its historic capital, Riga, natural beauty, and Baltic Sea coast.

These stats were collected through general studies by prominent institutions that analyzed Latvia's tourism sector. They represent Latvia as a whole, not certain parts of the country that are either better or worse-off. These studies were then summarized into a given rating.

Riga is the capital and largest city of Latvia. 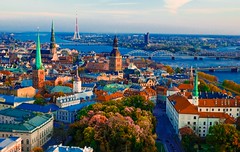 Daugavpils is a major city in Southern Latvia. 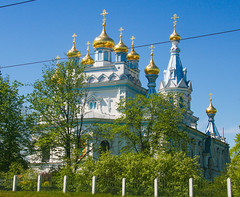 Get a visa for Latvia...

Originally, Latvia was inhabited by a series of Baltic tribes who were invaded by Germany in the 12th century. The city of Riga was founded during this time and Christianity was introduced. In the 16th century, the entirety of Latvia fell under the control of Poland, after which Latvia was independent for eight years, during which it was known as the Kingdom of Livonia. For a brief time, Livonia reentered the Grand Duchy of Poland-Lithuania but the country fell under Swedish rule in the 17th century. During Swedish rule, Sweden built a lot of infrastructure in Latvia that helped it trade with Western European countries like Britain and France. After the Great Northern War, Latvia fell under Russian rule, although, unlike neighboring Estonia, Latvia did not integrate into the Russian regime at all, and did not adopt Orthodox Christianity as the official religion. During World War One, Latvia fought a war against Russia, and later gained independence, although the country was forced to join the Soviet Union after the end of World War Two. After regaining independence in 1991, Latvia joined the EU and NATO.

"In the largest cities (Riga, Daugavpils, Liepāja), the local public transport is anchored on trams which serve main routes. Buses are also available. In the smaller cities, buses are effectively the only form of public transport. Vehicle rental is readily available in Riga, including the airport." - On Latvia

See if you can travel to Latvia visa-free