Welcome to Nepal. Nepal is a country in South Asia that borders India and China. It is known for its natural beauty and for being home to the world's tallest mountain; Mount Everest.

These stats were collected through general studies by prominent institutions that analyzed Nepal's tourism sector. They represent Nepal as a whole, not certain parts of the country that are either better or worse-off. These studies were then summarized into a given rating.

Kathmandu is the capital and largest city of Nepal. 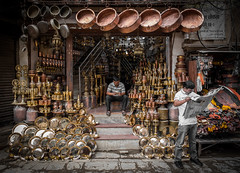 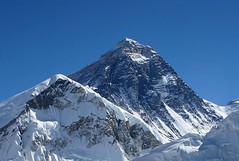 The history of Nepal starts with the Kirat Dynasty who were quickly followed by the Licchavi and Simroun dynasties. During Thakuri times, Nepal shared close bonds with the region of Kashmir, now split between India, Pakistan, and China, and a class system, modeled after the one in India, was set up. Many important temples were built in the country, during this time. During Malla rule, which began in the 12th century, Nepal conquered large parts of present-day Tibet and Northern India. During the 18th century, Nepal fought a war with the United Kingdom during which the British were defeated. After the formation of the Kingdom of Nepal in the 18th century, the country faced political instability in the 19th and 20th centuries, with many coups and political uprisings. A democratic system was formed in 1990.

"Mountain bikes and ordinary bicycles are cheap and the best form of transportation for economy tourists. One can hire them at Thamel and Jhochhen (Freak Street), all in Kathmandu. Mountain bikes can also be hired around Pokhara. Tourist bus services provide easy transportation to prime areas like Pokhara and Chitwan." - Welcome Nepal

See if you can travel to Nepal visa-free