Welcome to Paris. Paris is the capital and the largest city of France as well as its cultural epicenter. The city is home to the country's main tourist attractions, including Notre-Dame, the Louvre and the Arc de Triomphe.

To learn more about traveling to Paris, watch our Paris vacation travel guide video. This is an ad for another Tripetta service approved by Tripetta France.

These stats were collected through general studies by prominent institutions that analyzed Paris's tourism sector. They represent Paris as a whole, not certain parts of the city that are either better or worse-off. These studies were then summarized into a given rating.

One of the tallest buildings in Paris, the Eiffel Tower is the most recognizable building in Europe. 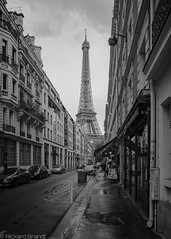 The Notre-Dame, which is over 800 years old, is one of the oldest churches in the world. 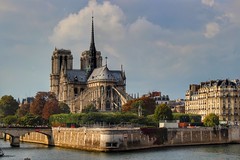 The Louvre is the second-largest museum in the world displaying paintings, including the world's most valuable painting - the Mona Lisa. 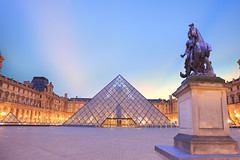 Located at the end of the Champs-Elysees, the Arc de Triomphe is an arch that has inspired hundreds of other arches built around the world, as well as one of the main attractions of Paris. 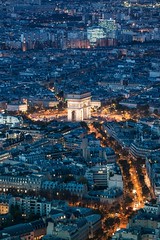 The first settlement near the modern city of Paris was built in the 3rd century BCE by a Gallic tribe called Parisii. When the Romans arrived, the Parisii set fire to their city to make show that they would rather have their city burned then cede it to Rome. The Romans eventually captured the area and built a town on the grounds of the ancient town called Lutetia, which was also the town's original name. After that, the city was invaded by the Gauls and Lutetia was renamed Paris. Christianity developed in Paris and the city has grown into an important Christian community. The city then changed hands from the Gauls to the Salian Franks, then to the Merovingians, and finally to the Carolingians under the Charlemagne Dynasty. Under Carolingian rulers, Paris was a large regional capital with many important industries. Paris had a large and strong economy in the 11th, 12th and 13th centuries. In the Middle Ages the city was significantly improved with new cobbled streets and tall buildings constructed. The city's first university was established at the start of the 13th century. In the 14th century, the city's development was severely hampered with the onset of the Black Death. Numerous riots and uprisings against the government ensued. After that, the English launched the Hundred Years War which further paralyzed growth in Paris. Momentarily, an English duke even took control of the Parisian government. Power was restored after the Anglo-French truce of 1444.

Paris was completely rebuilt in the 19th century by Baron Haussman to make it easier to get around the city. The city also hosted the Universal Exhibition and the Eiffel Tower was built. During the 20th century, the city suffered greatly during the World Wars, after which great economic damage was inflicted on the city. However, the city quickly recovered and became one of the top tourist destinations in the world.

"Getting Around in Paris – Metro, Bus, Boat, Bike, Train… Walk, peddle, ride above ground, ride underground, or go by boat. It's a relatively compact city, so combining your own two feet with low-cost public transportation is the best way of of getting around in Paris." - ParisInsidersGuide.com

The basics. AVOID SCAMMERS. USE THE METRO. USE UBER (NOT LOCAL TAXIS). And don't buy OVERPRICED souvenirs, food, and other items.