Welcome to Qatar. Qatar is known for its capital, Doha, and for being the world's richest country.

These stats were collected through general studies by prominent institutions that analyzed Qatar's tourism sector. They represent Qatar as a whole, not certain parts of the country that are either better or worse-off. These studies were then summarized into a given rating.

Doha is the capital and largest city of Qatar. 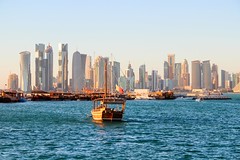 During ancient times, Qatar fell under Persian and Babylonian control. The country was occupied by Greece in the 4th century BCE and fell under Persian control again in the 3rd century BCE. Qatar was ruled by the Umayyad Empire in the 7th century and by the Abbasids of Iran in the 8th century. Qatar became a Portuguese colony in the 16th century and established close ties with the Ottoman Empire. Qatar fell under the control of Saudi Arabia in the 18th century. Today, Qatar is the world’s richest country by GDP per capita due to the production of oil.

"Railways. Buses and taxis have been so far the most popular public transport in Qatar. The Qatar Integrated Railways Project covers four metro lines in Doha, tram routes in West Bay, Lusail high-speed line and dedicated freight airways. ... The Metro will have four lines with an overall length of 300km and 100 stations." - OnlineQatar

See if you can travel to Qatar visa-free